On Friday, April 17, we attended Mistakes Were Made: Computer History, Decompiled. Sponsored by NYU’s Department of Media, Culture and Communication, the program was organized around a series of conversations which paired “emerging scholars” with practitioners in the field.

Bonnie: So in the event page’s own words, it was focused on “challenging traditional technology narratives.” But after the event I was still wondering Whose stories are we telling? and Who is telling these stories? I was specifically thinking of these questions in terms of gender, race, and class. A few of the presenters focused on these, but in some cases there wasn’t an acknowledgment that we were still talking a lot about middle class white men (which I would argue is a “traditional technology narrative”).

Hillel: That’s a good point. I think for me this was brought home most forcefully during Jason Scott and Kevin Driscoll’s talks, which proposed an “alternative” origin myth for the internet located in BBS technology and networks, as opposed to the more canonical origin myths of ARPANET or Silicon Valley. However, this alternate origin story ended up looking a lot like the canonical ones or, put another way, the participants looked pretty similar: a lot of white guys with long hair. It was clear from a couple of the other presentations (I’m thinking particularly Stacy Horn’s really fascinating talk about founding and running Echo, an early social network based in New York State.

Another theme I noticed which carried through a number of the presentations was the distinction between the work of computers and humans. In general, the word “labor” wasn’t used a great deal, but it was pretty clear that the dividing line between humans and machines has a lot of implications on the value of and visibility of labor.

Bonnie: That idea was most present in Stephanie Dick’s talk, “More Powerful Principles: Exploring the Early Automation of Proof.” Mathematical proofs had always been made by mathematicians (i.e., humans), and when computers were introduced in the 1950s, mathematicians were suspicious of proofs made by computers. The push back was not so much “computers are taking away our jobs” as “computers are not as good at our jobs.” There was some really interesting language about class and labor used in the discussions about whether computer-produced or human-produced proofs were “superior.” Are the computers more like professors (our equals) or more like slaves (our inferiors)? So it was implied what labor valuable and what wasn’t, but it was still not explicitly talked about as “labor.”

Hillel: I can’t believe you didn’t say anything about how you want Stacy Horn to be your new BFF!

Bonnie: Okay, I will talk about how I want Stacy Horn to be my new BFF. 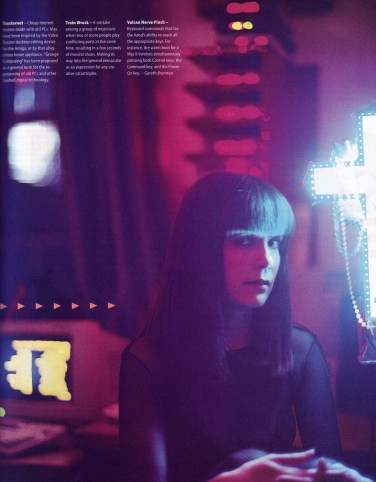 Of all the presentations, her talk was the most explicit about gender. (Joy Rankin did touch upon this in her discussion of students using academic time-sharing systems in the 1960s and 1970s in Minnesota.) She attributed the amount of publicity that Echo got to her being a woman, and illustrated this with some really fascinating photographs of herself taken by magazines in the early 1990s. I could only find the the photograph from a 1993 issue of WIRED (inserted in this post) but some of the other examples she showed were pretty sexualized. She also talked about getting more women online, and said “I was the only one trying.” I think all of these things are really important, especially in light of all of the recent chatter about why tech is so white and male.

Another point she brought up-which is also related to gender-is the need for rules and moderation (that some may call “censorship”) in order to have a harassment free space. This conversation still happens all the time around comments sections.

Hillel: To take this in a different direction, the presentation I enjoyed the most was Ramsey Nasser’s “The Iron Fortune Teller,” which interrogated our normative understanding of programming as being written exclusively both in English and in Latin script (which means, as he put it, that the statement “everyone should learn to code” really amounts to “everyone should learn English”).

One of Nasser’s recent projects is a programming language written in Arabic, but in this talk he described his search for historical evidence of programming in languages other than English. This project took him back to the Ottoman Empire and the invention of machines to calculate artillery trajectory in order to replace human “professional calculators” (professional mathematicians embedded in army units, who had a tendency to die off rather quickly on the battlefield). However, he discovered correspondence (archives!) between mathematicians who, following the demise of the Ottoman Empire, were imagining a world in which the Ottoman Empire had won the war. In this correspondence, the mathematicians discussed a programmable machine in which discrete calculation modules could be chained together in a variety of sequences in order to produce the desired output. In his estimation, this is an historical example of non-English language programming.

The day concluded with a somewhat humorous take-down of PowerPoint by Erica Robles-Anderson. As information professionals who have been subjected to a fair number of slide-based presentations during our graduate education, I think we were both pretty amused by an academic critique of PowerPoint…which used PowerPoint. This included negative perspectives, such as the Gettysburg Address reimagined as a PowerPoint presentation, but also more positive spins, such as Rich Gold’s “Reading Powerpoint.”

Bonnie: PowerPoint is so ubiquitous, it’s hard to imagine presentations (especially at a conference like this) without them. But that made it a really interesting way to explore how we communicate with and relate to each other. In her words, “the obvious isn’t boring, it’s actually really important.”